1. Scott Walker, Scott: The Collection 1967-1970:
I got into Scott Walker’s music in a backwards way, starting with the startling, harrowing masterpiece The Drift and backtracking to his ‘60s work. Still, aside from a purchased copy of Scott 4, which was a baffling record to say the least, I didn’t quite have a grasp of the man’s early solo output. That all changed this year, as in the wake of last year’s brilliant Bish Bosch I decided to explore his music more closely, and I learned about his obsession with Jacques Brel, Ingmar Bergman, and transforming himself from a teen icon to an avant-garde auteur. Scott 4 started to click. And then this amazing, gorgeous box set came out in June. The timing was so perfect, I wasted no time getting it, and I’m glad I did, as it’s been a rewarding experience learning more about his first four albums, each of which were increasingly more brilliant, his run culminating in the slipshod but oddly ingenious ‘Til the Band Comes In (I finally get Jarvis Cocker’s joke on “Bad Cover Version”). These albums are all so strange, foreign, and exciting, as you hear Walker tentatively set off covering French songs, and gradually create a persona unlike any that pop music has ever seen. Traditional and experimental don’t collide as much as coalesce, with astonishing grace, and it’s gotten to the point now where I’d be listening to my metal music for work and all I want to do is go back to these albums and listen to them well into the night. It’s a peculiar, haunting, indescribable journey, so modern even though they’re all more than 40 years old now. Genius. Indispensable.

2. Deep Purple, The Complete Albums 1970-1976:
As you can probably tell, I’m a big fan of the recent trend of major labels repackaging bands’ discographies into compact, fairly-priced box sets. After all, it makes sense commercially – it saves shelf space and is a really good deal – and in the case of Deep Purple, whose back catalog beyond In Rock and Machine Head has always been expensive in North America, this is a perfect chance for those who didn’t own physical copies of the albums to do a little catching up. And this ten-disc set is phenomenal, chronicling their classic Mark II era, their subsequent lineup with David Coverdale and Glenn Hughes as dual singers, as well as the strange Tommy Bolin experiment that lasted only one album. In less than seven years they had put out six albums that changed the heavy rock landscape forever, in numerous ways, and this box set is a fantastic way for new listeners to discover and immerse themselves in some great, timeless music. There’s so much more to Deep Purple than “Smoke on the Water”, and hopefully in a few months a Rock ‘n’ Roll Hall of Fame induction will offer some vindication. 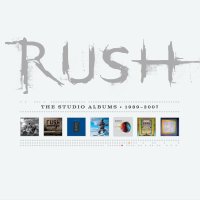 3. Rush, The Studio Albums 1989-2007:
When Rush released the Sector box sets in 2011, which I personally freaked out over, it felt oddly incomplete, because their subsequent seven albums for Atlantic weren’t included. While it’s not as eye-popping as the Sector sets, the new The Studio Albums 1989-2007 ties those loose ends well. Much has been made of how 2002’s Vapor Trails has been fully remixed and remastered, giving that troubled, dense album a completely new and fresh sound – which forced many including yours truly to reassess that work – but for me the real treat is to hear a newly remastered version of 1989’s Presto, which always sounded far too thin on CD but now pops out more. This 18 year period was a weird one for Rush, punctuated by pop experimentation – Roll the Bones has not aged well – attempts to recreate the original power trio sound, personal tragedy, revisiting their musical past, and ultimately redemption with the sterling Snakes & Arrows in 2007.

4. ZZ Top, The Complete Studio Albums 1970-1990:
The ‘80s made people in the music business pull some heinous, heinous stunts. In the wake of the crazy, diamond-selling success of ZZ Top’s sequencer-and-drum-machine-driven Eliminator, Warner released the Six Pack box set in 1987, which featured the band’s first five albums gaudily remixed and rife with gated drums. After more than 25 years that gaffe has finally been corrected on this superb ten-disc box set, which offers the original album mixes of ZZ Top’s First Album, Rio Grande Mud, and Tejas for the first time ever on CD. Not only does it put the first 20 years of the band’s career in one neat and tidy package, but it’s a fascinating chronicle of one of the strangest ascents in rock ‘n’ roll history, where a humble blues rock trio from Texas slowly worked its way up, and aided by a image and sound makeover that was part ridiculous timing, part absolute genius, became global superstars.

5. Drive-By Truckers, Alabama Ass Whuppin’:
I’m a stubborn fool. I’ve been searching for the Drive-By Truckers’ classic album for more than a decade, but never ordered it online, hoping I’d find it in a store. Besides, the MP3s sufficed. But wherever I looked – Montreal, Toronto, Vancouver, London, Amsterdam, Oslo, Dallas, Miami, Brussels – I never found the thing. So my record-hunting misery mercifully came to an end when the band reissued the thing this year, in a nice, repackaged, remastered version. And to this day it remains a ferocious live album, recorded in half-empty clubs, the DBTs with so much more edginess and grit than they displayed on their first two albums. It’s a gigantic, sloppy, glorious blues, country, rock ‘n’ roll, psychobilly, and punk rock pile-up that the band would learn to parlay on record in the 2000s, highlighted by the definitive recording of the longtime staple “The Living Bubba”. And though it’s nothing new to a fan like me, it’s nice to finally have this album on my shelf.