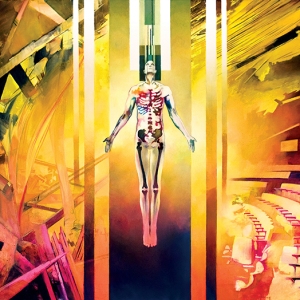 Teeth of the Sea, Master

At the Roadburn festival, the three venues in the 013 Poppodium are all connected in very quirky ways. At the back of the lower level of the big theatre is a door to a hallway that takes you to the balcony of the smaller Green Room. Go through another nondescript door from there, and you’ll wind up at the back of the even smaller Stage 01 Room. So it’s pretty easy to wander, and when you do you can bet you’ll literally stumble upon an amazing band you’ve never heard before. I just happened to be taking a shortcut on my way to a break after Jess & the Ancient Ones when I literally walked in on a set by Teeth of the Sea. I stood there transfixed. They were playing an indescribable, intense blend of electronic, heavy rock, and prog, like a more extreme Fuck Buttons. Skip ahead to August, when I was sent the new album Master out of the blue – another serendipitous I won’t bother to get into but is really funny – and I was floored by just how much the band’s music has expanded, incorporating too many musical styles to mention – the crazily cinematic, Moroder-meets-krautrock of “Responder” a prime example –  its overall effect not so much sprawling as kaleidoscopic, haunting yet oddly warm, dystopian yet welcoming. It fits in the same category as Tricky’s Maxinquaye and The Bug’s London Zoo, a dark, truly progressive opus that defies convention and categorization. Like my experience in Holland in April, Master stops you dead in your tracks, and stays in your head for hours after.