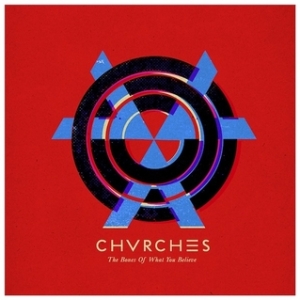 Chvrches,
The Bones of What You Believe

Glasgow trio Chvrches was the one band that got in my head, burrowed in and didn’t leave, for the entirety of 2013. I first learned about them when the BBC announced their Sound of 2013 nominees late last year, and starting with “The Mother We Share” right before New Year’s, “Recover” not long after, and “Gun” in spring, I gradually warmed to their simple but very clever sound. If there was ever a band perfectly designed to break out in 2013, it’s this one. They play icy yet wickedly hooky electropop in the vein of The Knife, Royksopp, and Robyn, while their arrangements are just artsy enough to echo the quirkiness of Grimes and Purity Ring. But the kicker, the thing that many on the indie side are willing to admit, there’s a commitment to unabashed emotion and pop melodrama that totally parallels the approach of Paramore. While some might say Lauren Mayberry’s lyrics venture a little too uncomfortably toward overkill, it’s that very element that gives this music much-needed humanity and sincerity – is there anything that makes hipsters more uncomfortable than sincerity? – and is why so many mainstream listeners have gravitated toward it. A great deal of credit goes to Mayberry, whose singing sounds both alluring, caustic, and vulnerable at the same time, and she dominates the bulk of the record, especially the menacing “Lies”, the tender “The Mother We Share”, the rosy-hued “Night Sky”, and the deceptive “Gun”. Meanwhile, her collaborators Martin Doherty and Iain Cook (formerly of post-rock band Aereogramme, much to my great surprise) create a minimal yet very rich and lively backdrop that proves to be every bit as charming as Mayberry’s singing, the best example being the climactic synth break near the end of “Tether”, a gentle explosion of stabbed notes that pop like little fireworks atop a ferocious dance beat. And even the two tracks sung by Doherty, which initially stuck in my craw because I so love Mayberry’s voice, have grown on me a great deal to the point where they’re no longer sticking points but well-timed respites from the visceral intensity of her songs. Loaded with phenomenal singles and more potentially great ones, The Bones of What You Believe is a beautiful marriage of the mainstream and the avant-garde, indie coolness and shameless romanticism. Were it not for the perfection of my chosen Album of the Year, this would have wound up at the top of the heap.