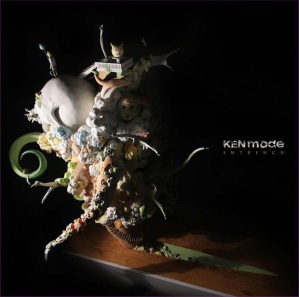 The Western Canadian band follows up the Juno Award-winning Venerable with a fifth album that continues the evolution of their distinct blend of AmRep noise, tense hardcore, and robust metal riffing. While Venerable was pleasing because the band’s songwriting had finally caught up to their incredible live energy, Entrench is an improvement on all fronts. Working with producer Matt Bayles, the Winnipeg trio has created their biggest-sounding record to date, combining vitriol that rivals Today is the Day with a thick-sounding rhythm section. As a result, that tetchiness of the band’s songs is now augmented by a punchier sound that brings out the aggression and anger even more. This is yet another huge step forward by a band that continues to improve greatly with each new release. Now you can truly say these guys are in what Henry Rollins called, “Kill everyone now mode.” (MSN, March 19)

Kadavar’s debut album had many of us furrowing our brows and saying, “Another[$ITALICS] Swedish retro band?” The trio hails from Berlin, it turns out, but so strong was their replication of all sounds 1970, the comparison to the current wave of like-minded bands from Sweden was begging to be made. Like the best of those Swedish acts, Kadavar have quickly created their own niche: Sabbath and Pentagram obviously form the foundation, but there’s a level of filthiness to the music that also bears similarities to Buffalo and Captain Beyond. Although Wolf Lindemann’s rather flat singing is an acquired taste, this second album is a good improvement over the last record, thanks to the swinging ‘Dust’ and the psychedelic ‘Liquid Dream’. (Terrorizer magazine)

The Swedish band’s sound is next to impossible to pin down, but that’s a good thing. A great example is the 11-minute “Talion”, which kicks off their third album, as it veers from pensive melodies, to post-rock, to typical Southern Lord crust, to moments of sheer devastation led by vocalist Christina. The song lengths might be long, but this is very involving music, with enough of a progressive air to it that will attract those who have gotten sick of the label’s recent crust punk obsession. (MSN, April 30)

A lazy writer would describe Magister Templi as “just another Mercyful Fate rip-off band”, but the Norwegian band brings a whole lot more to the table than just some half-handed Melissa homages. Doom, NWOBHM, and European heavy metal coalesce into a spellbinding debut album that contains many reference points, yet refuses to settle on one. You hear Pagan Altar one minute, Candlemass the next, and yet, the great Fate the next, and it’s all held together by musicians that are clearly experienced enough to not let those influences become too distracting. For an “old school” album this record is deceptively varied all the while delighting in occult/Satanic lyrical things. Tying it all together like The Dude’s rug is the brilliantly named singer Abraxas d’Ruckus, who belts out his lines in an authoritative bellow, taking already excellent compositions and catapulting them even further. “Master of the Temple”, “Lucifer”, and “Tiphareth” immediately stand out thanks to some very contagious lead riffs and d’Ruckus’s persona, while the acoustic-tinged “Vitriol” incorporates a pagan, Black Widow influence into a decidedly evil arrangement, proof that Magister Templi are much more than a retro gimmick. (MSN, May 7 )

36. Powerwolf, Preachers Of The Night (Napalm)

Power metal is such a difficult genre to get right. Not only do you have to have the right amount of instrumental and vocal flamboyance, but the songs have to be unbelievably catchy al the time. Bombast is key, but that sing-along quality is as well, and the one power metal band that did it better than any other in 2013 was Powerwolf, whose latest album offered the same werewolves-meet-Catholic shtick craziness they’ve always done. As insane as these songs are, you remember them long after first hearing them. Attack. Attack. Amen, and attack.

While Carcass deservedly attract the bulk of attention this week, fans of the more primal side of death metal will be equally elated by the arrival of Grave Miasma’s much-anticipated full-length debut. Warmly recorded by Jaime Gomez Arellano yet dense enough to envelop listeners and towering enough to evoke the kind of ominous power this form of music demands, the UK band immediately establish themselves among death metal’s elite with this album. Evoking the cavernous morbidity of Incantation’s seminal “Onward to Golgotha” yet confident and brash enough to throw their own ideas into the mix – the inclusion of Hammond organ is inspired – this foursome make one hell of a statement. (MSN, September 17)

Consistently one of the most exciting avant-garde bands in the country, Locrian continue to evolve with each new record. The Chicago band’s latest album takes their abstract sound and molds it into something more accessible than anything they’ve ever done before. It feels like a natural progression from 2011’s The Clearing and last year’s collaborations with Mamiffer and Christoph Heemann, but at the same time pulls the rug out from under the listener with songs with definable structure like the synth-accentuated “Eternal Return” and the acoustic guitar/drone combination of “Two Moons”. Still, the band is at their best when cranking up the krautrock influence, combining it with elements from post-rock and black metal on lengthier cuts like “A Visitation From the Wrath of Heaven” and “Panorama of Mirrors”. It all comes to a head on the concluding, 15-minute piece “Obsolete Elegies”, yet another brilliant instance where conventional instrumentation (in this case, piano and acoustic guitar) mesh with haunting thuds and groans, Tangerine Dream-influenced synth melodies slowly taking the melody skyward. Crucially, this is “experimental” music that doesn’t keep new listeners at an arm’s length; it’s plenty abrasive at times, but it’s enveloping and welcoming, and this record has more than enough warmth to offset the deathly chill. (MSN, June 25) 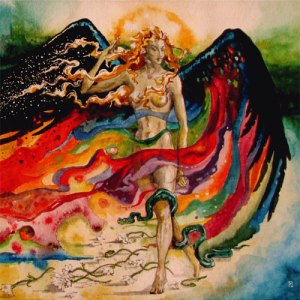 Nine months after the release of the album they’ve put out the three-song Astral Sabbat EP, and what’s cool about this record is that it gives you the sense that there’s no complacency in this band at all. Indeed, it might come off to some as a mere stopgap release, but when you hear it, Astral Sabbat feels like a bold step by a band determined to evolve, not just recycle the same formula over and over. The new material sounds richer, as the band mines the psychedelic sound of their music even more deeply. The pulsating title track is an inspired replication of acid rock, built around a contagious bassline groove that carries the song from start to finish, as lead singer Jess takes on more of a deep-voiced, Grace Slick-style persona more than ever before. A faithful but spirited cover of Shocking Blue’s 1969 single “Long and Lonesome Road” is an excellent choice, a song that’s right in this band’s wheelhouse, but the real gem on this EP is the 15-minute “More Than Living”. “Sulfur Giants” already showed Jess and the Ancient Ones have plenty of skill when it comes to assembling a song that stays engaging for more than 12 minutes, but “More Than Living” is even bolder, expanding on the idea, gracefully transitioning from subdued, acoustic guitar/piano sections to more insistent hard rock sections. It ebbs and flows beautifully, seamlessly, the mark of a band that not only knows how to replicate vintage sounds, but put together something smart and creative in the process. The track is an inspired climax to a shockingly good EP. If you weren’t excited about the potential of this fine band last year, you should be now. (MSN, March 8)

It had been three long years since we last heard from the Wisconsin singer and leader of her eponymous band, on 2010’s ‘Witness’ EP and Sabbath Assembly’s album ‘Restored To One’, but now she’s once again ready to share some new music, and she and her band have come through with a knockout album in ‘Blood Moon Rising’. Centered as usual on Thoth’s crystalline, dulcet singing, unlike past releases the band’s trademark doom influence is held back just a touch, allowing for more of a psychedelic influence to creep to the surface. The overall effect is seductive, resulting in Thoth and the band’s finest work to date…The new record is more about restraint, with such understated tracks as ‘Into A Sleep’ and the beautiful, seductive ‘Keep Your Weeds’ opting for a slow burn rather than a pulverizing payoff. In turn, that subtlety serves as a perfect backdrop against which for the charismatic singer to turn in an immediately memorable performance. (Terrorizer magazine)

Popular music has always been ephemeral, but in the digital age it’s becoming more and more crazed every year, where the most ridiculous, off-the-wall songs capture the imagination of millions, sometimes billions. Heavy metal isn’t exempt, either. In early 2010 an unknown band named Kvelertak became an overnight sensation among file sharers, word spreading like mad about this crazed group of drunkards singing in Norwegian and playing a raucous blend of punk rock and black metal. In fact that first album was so widely shared that most people had the MP3s by the time it was officially released in North America a year later.

Three years later, everyone including the band knows you can’t catch lightning in a bottle twice, and there’s bound to be a more measured response from listeners now that the novelty has worn off. All they can do is build from that rollicking debut, and Kvelertak do so to superb effect on Meir. Reuniting with producer Kurt Ballou, the energy is still there on such barnstormers as “Månelyst” and “Buane Brenn”, and there are loads of explosive hooks amidst the fury (“Spring Fra Livet”, “Snilepisk”), but the big difference is how much more eclectic the record is. A classic rock feel permeates much of Meir, whether it’s the Zeppelin-esque acoustic guitar heard on “Evig Brandrar” or those undeniable Stones-influenced riffs that highlight “Tordenbrak”, and in so doing Kvelertak, already a difficult band to categorize, transcend metal and hardcore, delivering a very good, often great rock ‘n’ roll record. (Decibel magazine)