Driven south to the land of the snow and ice
to a place where nobody’s been
Through the snow fog flies on the albatross
Hailed in God’s name, hoping good luck it brings

And the ship sails on, back to the north
Through the fog and ice and the albatross follows on

The mariner kills the bird of good omen
His shipmates cry against what he’s done
But when the fog clears, they justify him
and make themselves a part of the crime 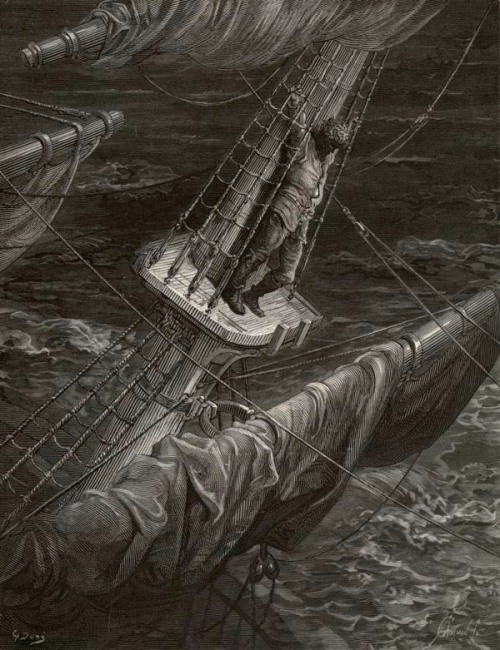 The albatross begins with its vengeance
A terrible curse, a thirst has begun
His shipmates blame bad luck on the Mariner
About his neck the dead bird is hung

“There,” calls the Mariner
“There comes a ship over the line”
But how can she sail
with no wind in her sails and no tide?
See…onward she comes
Onward she nears, out of the sun
See…She has no crew
She has no life, wait but there’s two 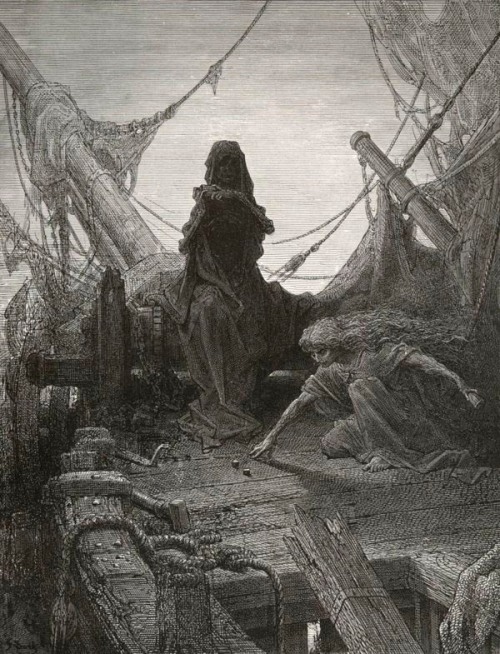 Death and she, Life-in-Death
They throw their dice for the crew
She wins the Mariner
and he belongs to her now
Then…crew one by one
They drop down dead, two hundred men
She…she, Life-in-Death
She lets him live, her chosen one 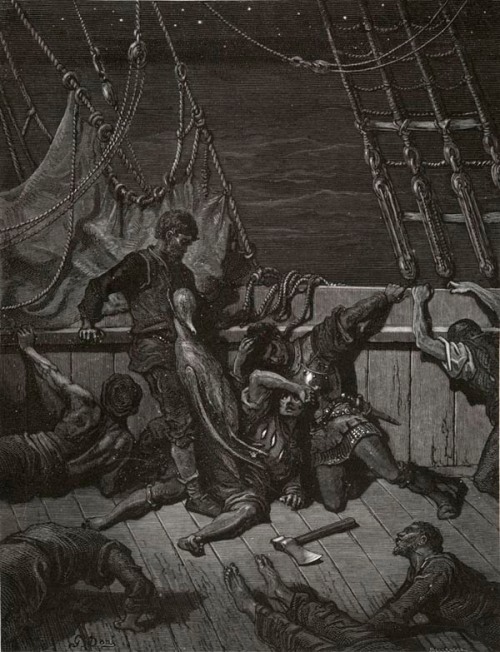 “One after one by the star dogged moon
Too quick for groan or sigh
Each turned his face with a ghastly pang
and cursed me with his eye
Four times fifty living men,
and I heard no sigh nor groan
With heavy thump, a lifeless lump,
they dropped down one by one”

The curse it lives on in their eyes
The Mariner he wished he’d die
Along with the sea creatures
But they lived on, so did he 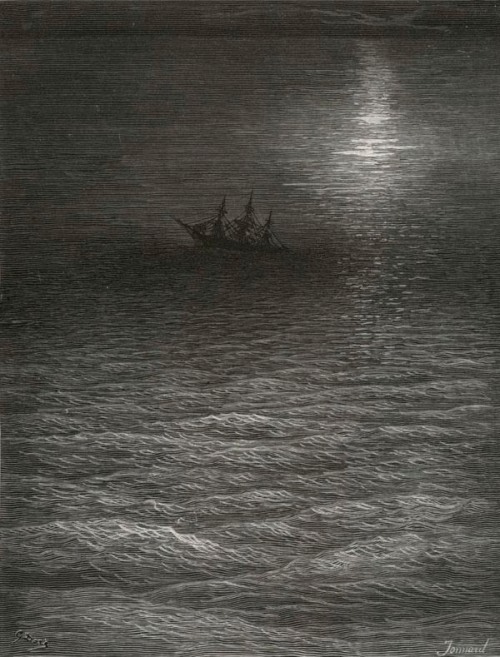 And by the light of the moon,
he prays for their beauty, not doom
With heart he blesses them
God’s creatures all of them too

Then down in falls comes the rain 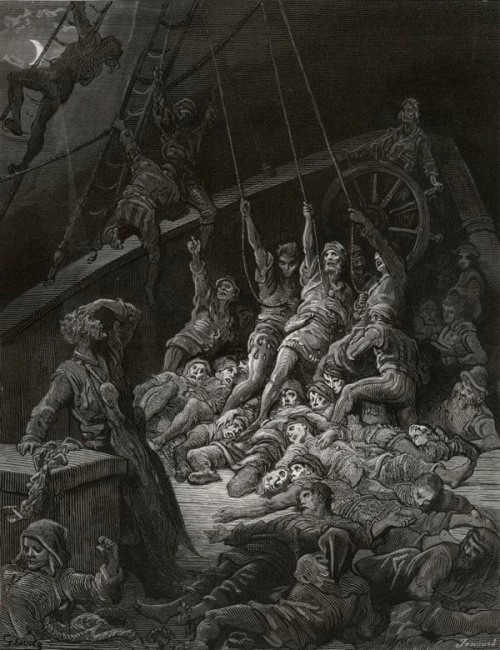 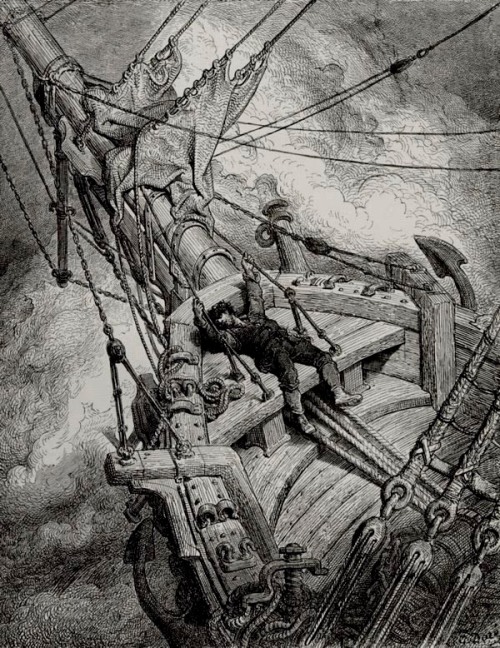 And revenge is still sought, penance starts again
Cast into a trance and the nightmare carries on

And then a boat came sailing towards him
It was a joy he could not believe
The pilots boat, his son and the hermit
Penance of life will fall onto him

And the ship, it sinks like lead into the sea 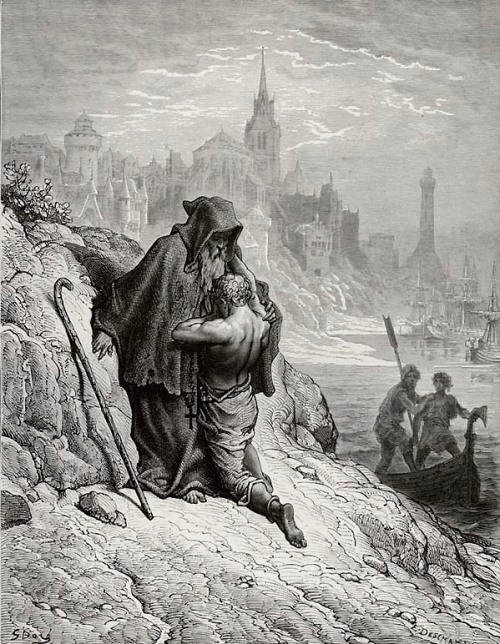 And the hermit shrieves the Mariner of his sins 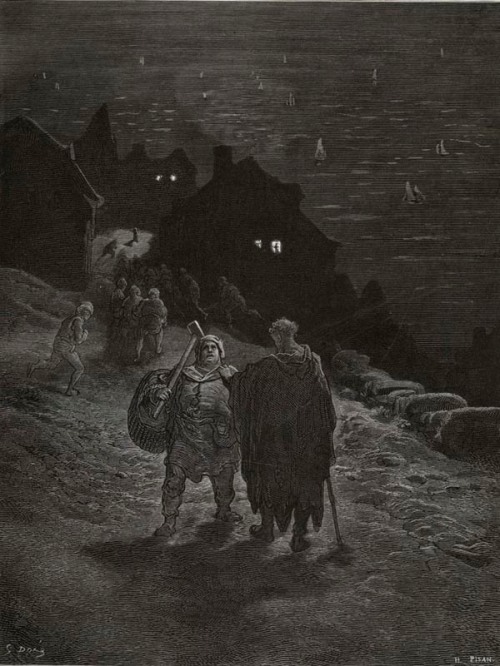 And the wedding guest’s a sad and wiser man 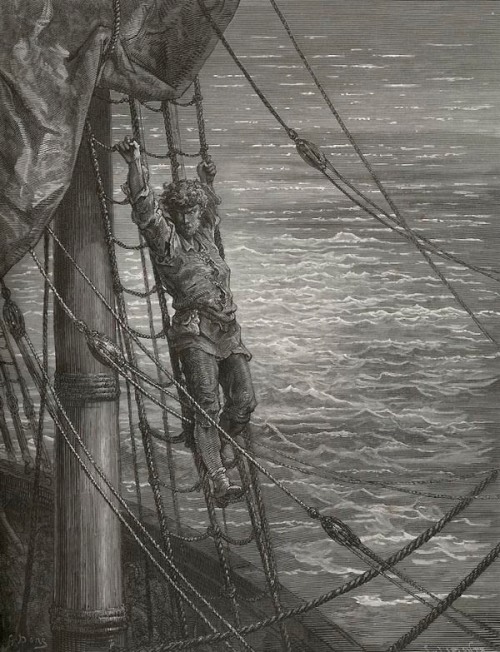 And the tale goes on and on…

…and on and on

Lyrics by Steve Harris, based on the poem by Samuel Taylor Coleridge, 1798. Illustrations by Gustave Doré, 1876.