Posted on December 14, 2015 by basementgalaxy 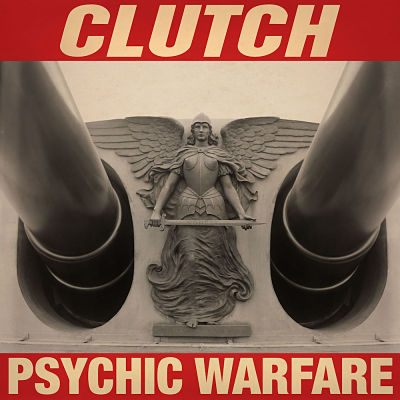 There is no such thing as a bad Clutch album. At least since 2004. I’m not wild about Pure Rock Fury. But starting with Blast Tyrant 11 years ago the Maryland band has found its identity, shedding their stoner and hardcore roots, embracing the blues instead, and over the course of six albums have carefully honed their craft, building up a very strong following all the while, to the point now where I do not hesitate to call Clutch one of the best American rock bands working today. And it’s not as if they’re complacently churning out music that sounds the same. No, these are four guys who are devoted to getting better, with a willingness to learn.  Consequently each new album sees them getting stronger and stronger in various areas: Tim Sult’s riffs will venture more into Texas boogie, JP Gaster’s drums will employ more skank beats, while Neil Fallon’s lyrics will display more poetry amidst his clever wordplay. 2013’s Earth Rocker was a fiery record, but Psychic Warfare tops it, a 12-song barnstormer that brilliantly captures the chemistry these four guys continually show onstage. “X-Ray Visions”, “Firebirds!”, the fan-friggin-tastic “A Quick Death in Texas”, “Sucker For the Witch”, and the filthy funk of “Your Love is Incarceration” make for as tight, rampaging, and groovy a start to a Clutch album as I have ever heard, but then they turn the tables on the listener with “Our Lady of Electric Light”, a languid, dusty, spaghetti Western epic, which is followed up a few tracks later with the beautiful, elegiac “Son of Virginia”. the band is en fuego from start to finish, hammering out the kind of rock ‘n’ roll that so few bands bother to play anymore. “Noble Savage” is so scorching you’d think it came straight off Powerage, for crying out loud. Clutch are unapologetic lifers for rock ‘n’ roll, and the longer they go, the more they keep playing, the better they get. (iTunes) (YouTube)