There isn’t much grunge music that I care to revisit anymore, but when it was announced that Sub Pop was going to remaster and reissue the seminal early work of power (and do I mean power) trio Tad, my ears perked up. Tad is one band whose music has aged well, perhaps the best of those early grunge bands, because their music skewed more towards metal than anything else. Listening to their classic second album 8-Way Santa today, you can draw some parallels between the nascent sludge metal sound, the hooky songwriting of Therapy?, and the proto-metal sounds of the Stooges and MC5. Recorded by Butch Vig right before Nevermind made him famous, this is actually a superior album in a lot of ways, especially in how its power and force feels a lot more primal than Nirvana’s high-gloss breakthrough, with loads of contagious hooks underneath all that heaviness. (Spotify)

It’s not exactly in keeping with what most rock critics (and music obsessives) feel, but I love a good compilation, especially the ones that create a distinct arc of an artist’s complete career. David Bowie’s death back in January was a huge, huge loss for popular music and culture, and it was inevitable that a new career retrospective would surface. Give Sony credit, too, because they have done a lovely job with the two-disc version of Legacy, whose 40 songs cover a sterling run that lasted nearly 50 years. All the essential tracks are there, with every album (save his eponymous debut) represented, creating a glorious, glittering arc from “Space Oddity” to Blackstar. Sure, I would have gotten rid of “Dancing in the Street” and replaced it with “Cat People (Putting Out Fire)”, but that’s only a minor complaint. This is as close to perfect as a Bowie compilation can get, a perfect primer to younger listeners who might be unfamiliar with the man’s diverse, endlessly enthralling body of work. (Spotify) 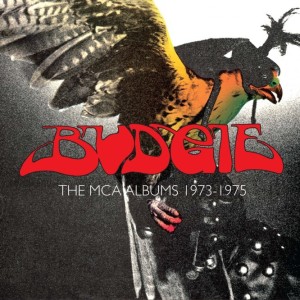 Budgie had been a curiosity of mine for nearly 30 years, going back to the time Metallica covered “Crash Course in Brain Surgery” back in 1987. But, North America being what it is, it was always difficult to get my hands on the albums whenever the mood struck me to search. Thanks to filesharing, though, I was able to get into the Welsh trio’s groundbreaking heavy metal, which equaled the brute force of Black Sabbath and foreshadowed the nimble groove (and high-pitched vocals) of early Rush. Thankfully 2016 saw the release of three of Budgie’s most important albums from the early-‘70s – Never Turn Your Back on a Friend, Bandolier, and In For the Kill! – in a tidy little box set. I had no idea it had even come out until I literally stumbled across it in Toronto one day, but I sure am glad it exists, It serves as a fantastic introduction to one of the wickedest, and woefully underrated, rock band in history. (Amazon)

If there was one body of work that needed some critical reassessment, in my opinion anyway, it was Ronnie James Dio’s output with his band Dio. At its best, it rivaled Rainbow and Black Sabbath, and throughout the 1980s, was bigger than either band. Thanks to the fine folks at Rhino, the first six albums Dio put out have been remastered (which was long overdue) and collected in a nice little box set. 1983’s Holy Diver and 1984’s The Last in Line are indisputable classics, featuring one of the best bands ever assembled (Dio, Vivian Campbell, Jimmy Bain, Vinny Appice), while subsequent albums Sacred Heart and Dream Evil are less consistent but still worthy of appreciation. Whether you’re looking to upgrade those old CDs or tapes or if you’re a younger metal fan eager to explore the solo career of the greatest singer heavy metal ever knew, this collection is perfect. (Amazon)

When Metallica bought their back catalogue and set up their own record label, you knew that reissues of their classic albums would be inevitable, and true enough, the first two did not disappoint in the least. The deluxe editions of 1983’s Kill ‘Em All and 1984’s Ride the Lightning, two of heavy metal’s most important and revered records, were absolutely crammed with multimedia extras, but while those are all great, I was most interested in how the new 2016 remasters would sound. The old CD masters never felt right, and frankly, I had always thought Ride the Lightning sounded a little too trebly. These new versions do not disappoint in the least, both beefed up nicely to conform with modern standards, but which don’t veer into brick-walled territory. Best of all, though, Ride the Lightning sounds brilliant, with significantly more bottom end, so Cliff Burton’s bass work shines through better. These two albums have had a colossal influence on myself, not to mention millions of other metal fans from the 1980s, and I appreciate the care with which their reissues were handled. When Master of Puppets comes out, I’ll probably flip out even more. (Kill ‘Em All on Spotify) (Ride the Lightning on Spotify)