Posted on December 2, 2017 by basementgalaxy

Happy end of 2017! Of course, I say that with all the irony I can muster, because wow, was 2017 ever a brutal year for so many people. The world is losing its collective marbles, America is coming apart from within (a self-immolation of a republic that I never thought I’d see in my lifetime), more very important artists dying, the #MeToo movement gaining astonishing momentum and traction, the journalism industry dying. Still, like last year, I keep plugging ahead, enjoying life as much as I can, and in the end, coming out pretty darn great.

The music journalism is still happening but on a much more downplayed level than ever before. Part of it is from severe burnout, part of it is greatly reduced interest in the music promotional grind, part of it is the fact that I am enjoying my life right now too much to waste too much time being underpaid for writing work. I still knock out a couple pieces per month, which is nice, and I really enjoy being involved with the Polaris Music Prize, Juno Awards (the metal category is truly a labour of love), and Rock and Roll Hall of Fame. However, when all’s said and done, none of that frivolous music nerdery amounts to a hill of beans when compared to life with my fiancée Stacey. That’s now top priority, and all the drama of the music world, the critic hive mind, and the severe insularity and elitism of the metal scene has no place in my life anymore.

Because of that reduced involvement in the relentless cycle of new music (I receive around 1,000 advance albums per year) I’ve been able to devote more of my time to listening exclusively for pleasure. Imagine that! Whether it’s cooking for my significant other or commuting to work, I’d have great music on, not stuff that I felt compelled to hear if only to keep up with the new releases week in and week out. I know Spotify will tell me later this month, but I’ll hazard a guess that my most listened to artists in 2017 were Yes, Prince, and Jethro Tull. I must’ve listened to Going For the One around 50 times on my commutes.

Still, I remain a music fan, and great new music is still thrilling. I’ve only become a lot more selective. This year was pretty solid for new tunes, and my top 20 is especially strong, but overall it doesn’t feel as towering as 2016 did. The “centricity” of my choices will be higher than usual I expect, but my choice for Album of the Year just might surprise you. You’ll have to stay tuned.

I’m getting old, and am frankly enjoying it thoroughly. This marks the 32nd year I’ve made a year-end music list, and this is 17th annual blog I’ve posted. Format-wise, nothing has changed: two days of reissues/live albums/etc., one day of new albums that deserve honourable mentions, and then the big top 20 albums and singles countdown, to be posted daily until December 24, when my Album of the Year and Single of the Year will be revealed, with great fanfare, to all six of you who read this. I say this every year, and I mean it: if I introduce you to one new favourite record in the next few weeks, then I’ve done my job. That’s the whole reason I do this. If 2017 was a rough one for you, I’m so sorry, and I sincerely hope things’ll get a whole lot better. I sense an even darker 2018, but as long as there’s new music and art and literature to enrich our lives, as well as enough people being good to each other, then perhaps we can make it through relatively unscathed. To quote the late Michelle McNamara, by way of Patton Oswalt, “It’s chaos. Be kind.”

(the header photo was taken Labour Day weekend, at a Bonsound records pool party at the FME festival in Rouyn-Noranda, Quebec. Stacey and I had an amazing time. She wrote about it, and so did I.)

(The photo below is Eddie the pom, happily doing his Robert Evans impersonation.) 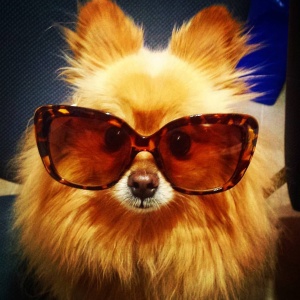 Past albums of the year (uh, please bear in mind I was sixteen when I started this):