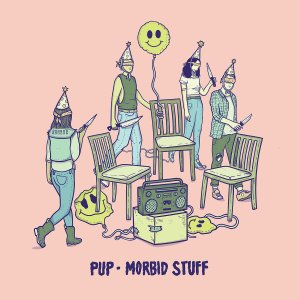 Back in 2016 when I was a member of the Polaris Music Prize Grand Jury, I was required to immerse myself in all ten short list finalists, as well as create a detailed endorsement and defense of one assigned title. At the time the Toronto punk band Pup was unfamiliar to me, and despite its moments, The Dream is Over ranked probably the lowest of all nominees (I still contend that year’s short list remains the strongest in the award’s history). One of my wife and I’s favourite stories is how our pup Eddie, ironically, objected greatly to hearing Pup on the stereo that summer. As the jury convened for those 11 hours of discussions over two nights, I did gain a much stronger appreciation for Pup, from their clever lyrics to their sneakily catchy melodies. Which brings us to Morbid Stuff, a big creative leap for the band that doubles down on the hookiness, ferocity, and scathing wit the band is so good at. “I was bored as fuck,” singer/guitarist Stefan Babcock hollers at the start of the record, “Sitting around and thinking all this morbid stuff / Like if anyone I’ve slept with is dead and I got stuck / On death and dying and obsessive thoughts that won’t let up /It makes me feel like I’m about to throw up.” For all the 20-something angst he exudes, Pup are brilliant at singing about existential crises that feel both gut-wrenching and joyous at the same time. There are moments where Babcock greatly resembles Craig Finn of The Hold Steady, in phrasing, profundity, and that nasal voice, too. He’s practically laughing in the face of misery on all of this record, inviting everyone to join him: We’re all miserable and will die, some sooner than later! Wheee! The first half of Morbid Stuff, especially, is the catchiest material the band has ever written: “Morbid Stuff”, “Kids”, “Free At Last”, “See You At Your Funeral”, and “Scorpion Hill” is a spectacular run that gets the record to an extremely high note. The latter half steers more toward heavier, more brooding territory, but while it takes longer to lure the listener in, it’s no less satisfying. Loaded with wickedly smart observations and self-deprecating humour, Morbid Stuff is the best work so far by a young band whose best music is still ahead.