Posted on December 17, 2019 by basementgalaxy 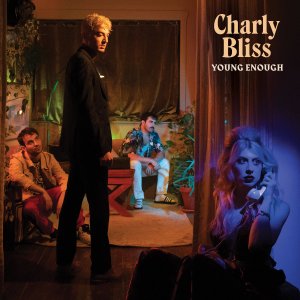 How great was the second half of 2019? Well, back at the end of June, Charly Bliss’s fabulous second album was my favourite of the year so far, and now it’s at number eight. Don’t let that diminish Young Enough, though, but it was easily the biggest surprise of 2019, at least for me. I thought Charly Bliss was a decent enough band on their debut Guppy, but they clearly did a hell of a lot of growing up between then and the follow-up, because not only is Young Enough thematically more mature, but it has the guts to swing for the fences, musically speaking. The emo/’90s indie side of rock music will always be the foundation of their sound, but this album sees them embrace their pop side in a way that other indie darlings are reticent to do. It reminds me of when Paramore similarly changed their direction on their jaw-dropping 2013 album: Charly Bliss aren’t afraid to sound big, and Young Enough‘s hooks and emotional power hit you like a wallop. Eva Hendricks has a remarkable talent for lyrics, and she is incredibly perceptive on every track: “Blown to Bits” is fatalistic, “Hurt Me” is vulnerable, “Camera” is loaded with dry wit, and “Capacity” is brutally self-reflective. The sleek, grandiose production benefits these songs immensely: the hooks are punchier on the rocker “Hard to Believe”, “Chatroom” shifts into full-on disco, and the title track plunges headfirst into stadium rock, including a slow build to a massive climax that feels both U2 and Kate Bush, a combination that should be revolting on paper, but the undeniable charm of this talented band is what ultimately makes Young Enough so special.